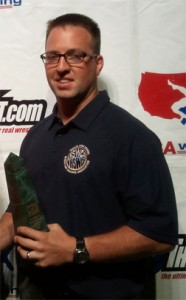 “Our goal is state, national and international titles, while inspiring young people to be the best version of themselves they can be.”

Coach Struck spends much of his time taking kids overseas.  Trips have been made to Japan, Australia, New Zealand, Mexico, Poland, Turkey, and Mongolia.  Coach Struck has twice been named to take USA Wrestling’s future Olympians overseas to the world championships in Serbia and Turkey.

Besides the work done with wrestling at Jeffersonville.  Coach Struck served as freshman football coach for 5 years, and has been a parkview middle school football coach the past 3 seasons.  Before coming to Jeffersonville Coach Struck spent 3 years at Greencastle winning both sectional and conference titles, and coaching football.  One year at New Palestine coaching wrestling, and one year with the Universityof Indianapolis.

“If we don’t take the time to show kids the right way, someone with more time will show them the wrong way.”